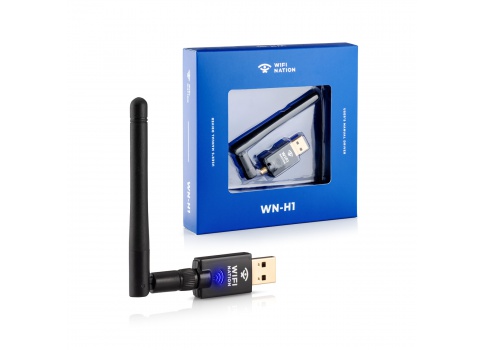 The WN-H1 is a wide-coverage, external USB wireless network adapter. Equipped with a Realtek RTL8811AU it operates with IEEE 802.11ac standards. With up to 433Mbps and dual-band 2.4GHz and 5GHz frequencies. It features wide-ranging support for Windows, Mac and many Linux distributions (including Kali Linux).

Giga-Fast 802.11ac Wireless with hardware-based WiFi optimization means WN-H1 delivers an extraordinary signal range. Combined with external high gain antennas you can be sure WN-H1 will broadcast blazing fast wireless networks to every corner of your home. It's external antennas make sure that your network signal penetrates through walls, helping to eliminate WiFi dead spots.

All Your Devices, No Lag.

With support for a vast selection of operating systems, our wireless network adapter is ready for any environment or task. Currently supporting Windows, Mac and many Linux distributions including Ubuntu, Debian, RedHat, OpenSuse and Arch including Kali Linux Debian-derived Linux distribution designed for digital forensics and penetration testing.