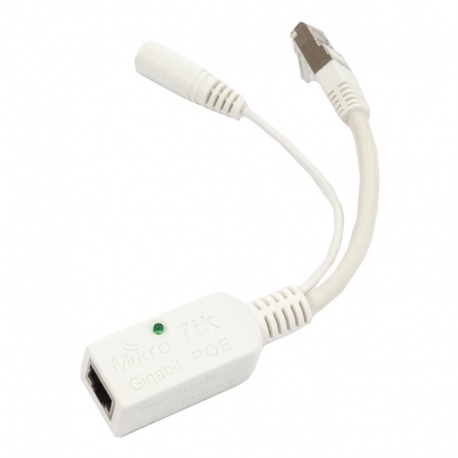 Gigabit PoE Injector
PoE injectors are generally not difficult to deal with at all. This Gigabit PoE injector simply needs to be connected to your RouterBoard and the Ethernet cable, and you’re basically done. There are no technologically advanced tools or even experience needed. Even if you don’t have a thorough background in networking, you can already run your electric power to your device in less than 5 minutes, thanks to this handy unit.

All the Advantages of a PoE
One of the foremost reasons why most wireless and networking manufacturers or developers are offering PoE is because it provides a wealth of benefits. Making it to the no.1 spot is the convenience of delivering the much-needed electric power over a single line rather than relying on multiple cables and wires. In the process, PoE helps save you a lot of time and even money since there’s no need to spend more on parts and accessories. PoE also reduces labor costs. One, it’s not labor intensive, and second, because the concept is very basic, you can install it all by yourself. Moreover, you can maximize your electrical power and reduce the risk of power interruption and damage, which usually happens when there are plenty of wires or cables to deal with. When you need to protect the cables, simply install an ESD surge protector, which is a great complement to your Gigabit PoE injector.

Fast and Reliable Uninterrupted Connection
With the Gigabit PoE injector you can now enjoy faster data speed. This doesn’t in any way hinder in the performance of your Internet or wireless connectivity. Rather, it boosts the transmission of data, especially large files, because you can now run the device even if there’s no immediate AC outlet available. It also has an integrated LED to indicate if the injector has power.

Compatibility
The Gigabit PoE injector works with DC barrel plugs from Titan Wireless. The barrel size of the connector is about 2.1mm.